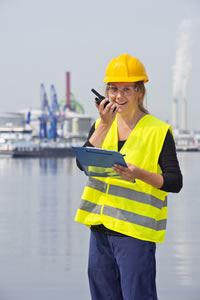 Two way radios, like any other electrical device, can be vulnerable to damage when liquids or solids work their way inside. To help users understand how much protection their device affords against varying levels of moisture and solid particles, they’re given what’s called an IP Rating. This is usually a 4-digit IP code, which represents an internationally recognised standard.

What does an IP rating mean?

The code starts with the two letters “IP”, which stands for Ingress Protection, followed by two numbers.

The first number rates the device’s ability to protect against solids. This number ranges from 1 to 6 (with 6 being the best).

The second number rates the device’s ability to protect against ingress of moisture/liquid. Ratings range from 1 to 7 (with 7 being the best). A few devices have a liquid ingress rating of 8 or 9, but these standards are set by the individual manufacturer themselves, so they can’t be reliably compared with each other. 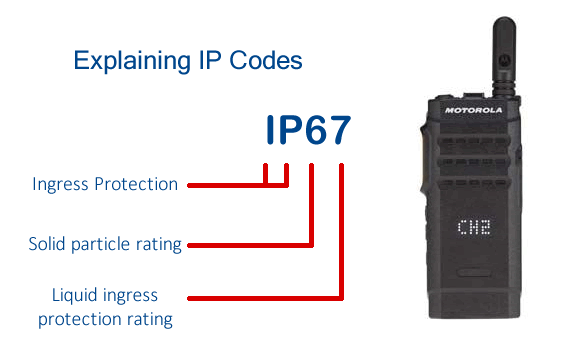 In the case of two way radios, both the radio and its battery are tested as one to obtain their IP rating.

What’s the benefit of knowing your radio’s IP Code?

It would be easy for a radio to be described as “showerproof”. But what does that really mean? It’s a vague marketing term that could describe anything from a few raindrops to a prolonged shower. Similarly, protection against ingress of solid particles could range from blocking a finger to a particle of dust.

Your two way radio’s IP code can give you a much better idea if it’s suitable for the conditions in which you intend you use it. Indoors? Outdoors? In a humid climate, a dry, dusty environment or at sea?

Let's take a look at some examples, and how you can interpret IP ratings in a practical way.

Motorola’s SL1600 has a rating of IP54. The rating of 5 for solids is very good, indicating it is protected against dust (but not completely dust-tight - that would need the highest rating of 6). The rating of 4 for water signifies the SL1600 is protected from water splashing against the enclosure.

So that particular model is probably ideal for indoor use and in areas where there might be moderate amounts of dust, and would be suitable to use outdoors where the radio might come into contact with some rain, but the conditions aren’t excessively wet.

By comparison, Motorola’s DP4400 model has an IP57 rating. This combines the same high level of protection against solid ingress with a far better level of protection in wet conditions (you could immerse this radio in 1m of water for up to 30 minutes and it wouldn’t come to harm). If you need a radio that can withstand tough conditions, this is it!

IP Codes that contain an “X”

Some IP codes contain an “X” instead of a number. An X signifies that the manufacturer considers that rating is irrelevant, for example where a radio is designed to be used in a wet setting, the rating for solid particle ingress is largely irrelevant, so that number may be replaced with an X, e.g. IPX7.

If you're looking for a radio for use in specific conditions and you're not sure what features or IP rating to look for, contact us at DCS 2 Way Radio for help or call 0800 294 7766. 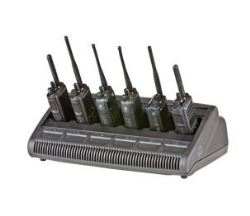 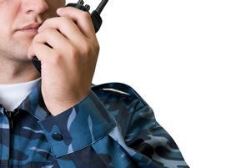